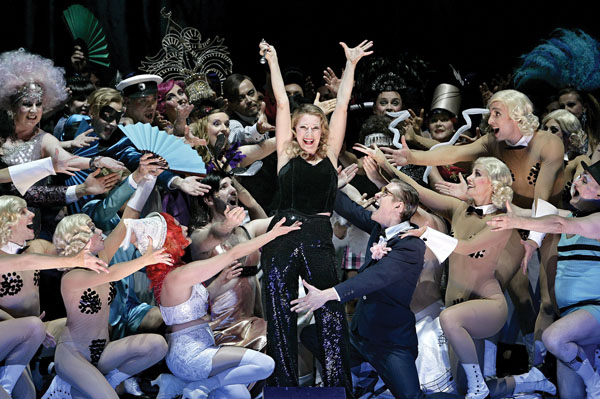 In June 2013, Paul Abraham’s rarely seen operetta Ball im Savoy was the ninth and final new production of Barrie Kosky’s first season as Intendant on the Komische Oper Berlin. With its witty libretto and jazzy score, Ball im Savoy often sounds like a German version of Cole Porter. Although nominally set in Nice and Paris, the work’s true setting is the glamorous, high-energy Berlin of the early ’30s. Don’t worry about following the various inanities of the plot, which the catchy music easily rises above. Abraham fuses different musical idioms — waltz, foxtrot, tango, gypsy and oriental motifs — with both schmaltz and irony.

Kosky’s staging alternates between elegant, wacky and overstuffed. The bookending acts set in the Marquis’s deco residence (sets by Klaus Grünberg) are effective for their simplicity and focus. The endless ball at the work’s center, though, is so choked with frenzied dancing, high-camp costumes and circus-like stage effects that it often stagnates despite its relentless energy. A notable exception is the brilliantly comical scene of the Marquis and Madeleine, with their respective partners, in adjacent chambres séparées.

Kosky has argued that works like Ball are vital to the KOB mission, both connecting to the company’s prewar origins as a revue theater and differentiating it from the city’s other two (more traditional) houses, the Staatsoper and the Deutsche Oper. This production makes a compelling case for the KOB as the ideal forum for rescuing such works from obscurity.